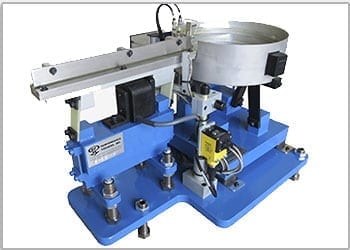 This vibratory parts feeding system was designed to feed two sizes of a part used in air conditioner desiccant systems. The simple cylindrical shape of the parts allowed the use of a “cascade” type bowl feeder, where all part orientation is performed within the inside diameter of the bowl. This eliminated tooling construction on the outside of the bowl, which along with the right-angle discharge into the vibratory track, resulted in a compact vibratory feed system that met our customer’s space requirements. 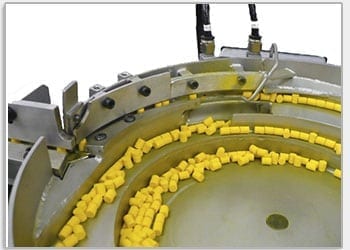 All orientation was performed in this section of the vibratory bowl feeder, immediately before discharging into the track, which is shown on the left side of the photo. 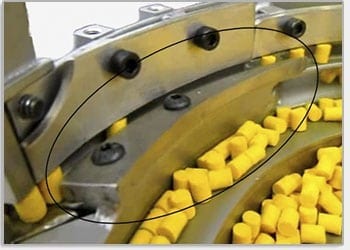 The smaller diameter part required a confinement between the orientation area of the bowl feeder and the discharge to maintain orientation. This photo shows the confinement (circled) in place. 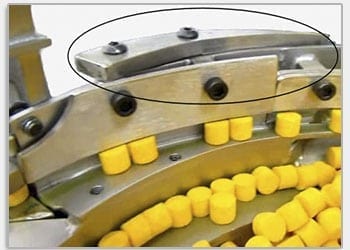 This photo shows the confinement (circled) bolted to a storage location when the system is running the larger diameter part. 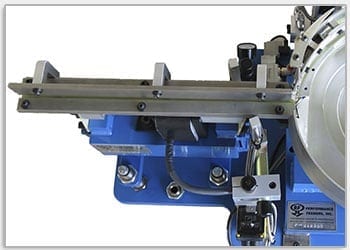 The vibratory straight line track included adjustable side confinements to maintain a common center line for each size part, and a photoelectric sensor that shut off power to the bowl feeder when the track was full of parts. 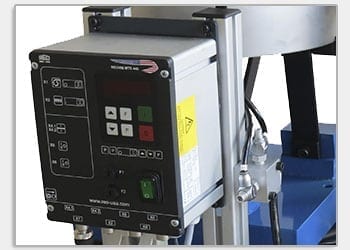 A Reovib variable frequency controller was included because the project was being developed in the United States before being placed in production in another country. This allowed the part feeding system to operate in a foreign electrical system with simple tuning changes.

This short video demonstrates each size part running through the vibratory feeder and the tooling changeover procedure to prepare the feed system to feed the different sized part.