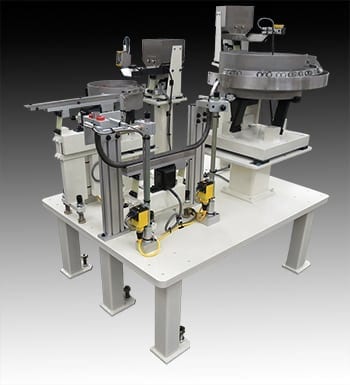 This system was designed for a consumer products manufacturer to feed two types of washers: A wavy spring washer and a fiber washer. Vibratory bowl feeders were used to orient both parts, and the feed systems were mounted on a common table to save space and cost. 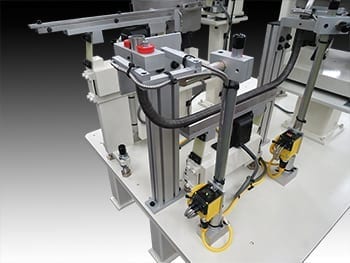 Both washers needed to be presented laying flat. Normally we would feed the parts from the bowl diameter-to-diameter into a vibratory straight line track. The spring washer could not be fed this way because its profile would overlap, so we used a vibratory floating mandrel. 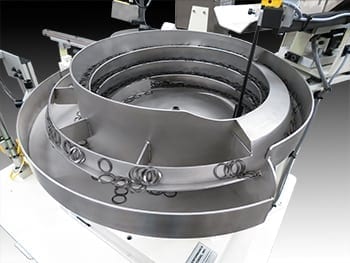 The spring washers were fed from the vibratory feeder diameter-to-diameter, without concern for overlap. 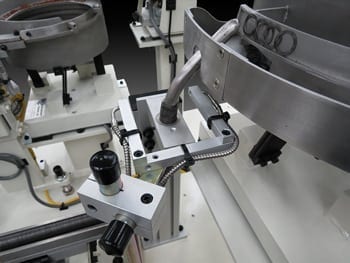 Instead of a conventional discharge from the bowl feeder, the end of the mandrel extended into the bowl, where a cam tipped the parts over and onto the mandrel so the parts were oriented face-to-face (stacked on the mandrel). Parts that missed the mandrel were recirculated through the bowl. 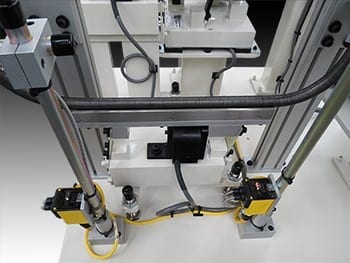 The mandrel, which was preloaded with parts at assembly, was held in place by retention blocks at the entrance and discharge ends, and was supported by a vibratory inline with a v-shaped top plate that drove the parts toward the discharge. 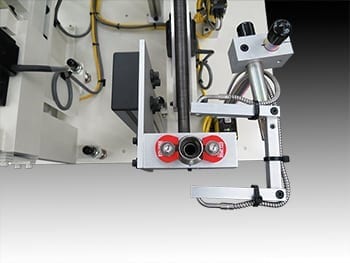 Magnets around the mandrel discharge tube separated the parts at the discharge to facilitate picking the top part off by vacuum. 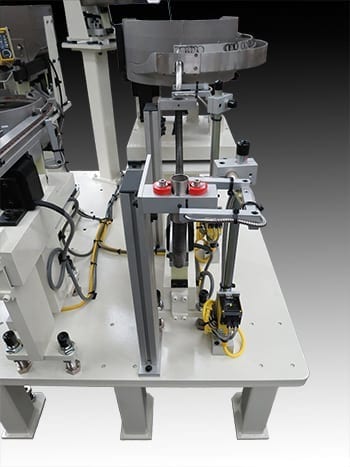 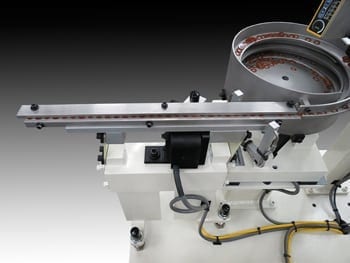 The feed system for the fiber washer, which could be oriented diameter-to-diameter, consisted simply of a vibratory bowl feeder and vibratory straight line track. 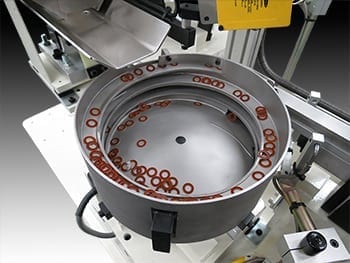 To save space, the bowl feeding the fiber washer was built so the parts were oriented before exiting the bowl wall, eliminating the outside tooling and return pan that’s common with stainless steel vibratory feeder bowls. 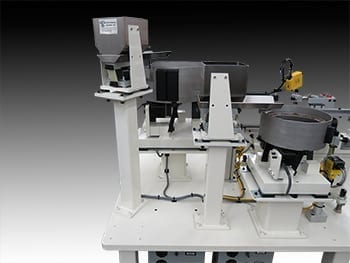 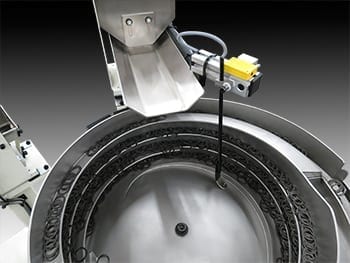 Sensors mounted over the bowls monitored the parts level in the bowls, automatically turning the hoppers on as needed to maintain the proper amount of parts in the bowls.

This short video demonstrates the discharge from the bowl feeder. The end of the mandrel extends into the bowl, where a cam tips the parts over and onto the mandrel so the parts are oriented face-to-face. Parts that miss the mandrel are recirculated through the bowl.