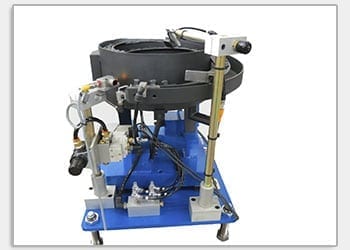 This vibratory bowl feeder was designed to feed an automotive part. With a low feed rate and tight space requirements, we designed a parts feeding system that allowed our customer to pick the part up directly from the bowl. 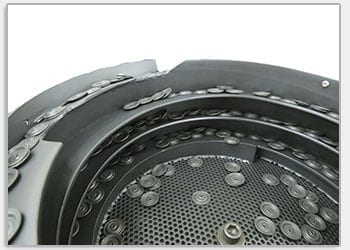 With rubber parts that needed to be kept clean, we coated the vibratory bowl with Teflon to facilitate part movement, and included a double bowl bottom with a perforated top piece. This allowed a vacuum to be applied to evacuate foreign particles. 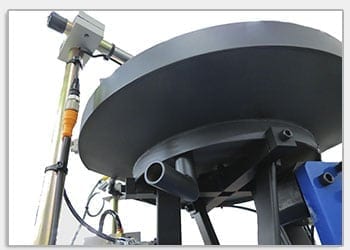 The tube on the bottom of the bowl feeder is for the customer to attach their vacuum tube. 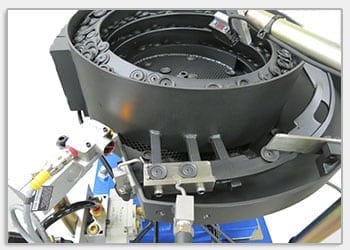 Oriented parts fed into this end stop mounted directly inside the feeder bowl. When the proximity sensor detected a part in the end stop, an air blow-off was actuated that prevented following parts from knocking the part in the end stop out of position. The vibratory bowl feeder would be shut off prior to the customer picking up the part so that vibration did not affect the pick-up. 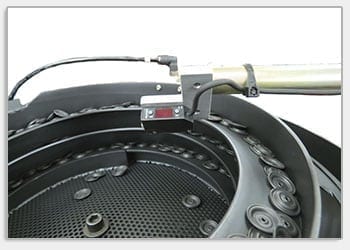 This proximity sensor monitored the amount of parts in the feeder bowl, and sent a signal to the customer’s controls when the part level was low.

This short video demonstrates the part feeding system orienting the parts and feeding them into the pickup nest. An air jet was used to blow the in-place parts out of the nest to simulate the operation of the system in our factory.